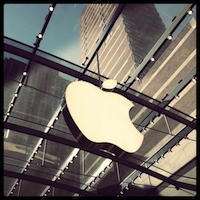 Most people would now accept that the rapid uptake of touch-driven, app-fueled devices have completely changed consumer behavior. It appears at the surface level to be just a new phase, albeit frenetic, in the uptake of online and websites and social media. But zoom out for a moment and you can see that there is an essential component that is now at the centre of all of this activity, and that is the user, the person, the individual.

In the post-PC era, we are not marketing to a demographic anymore; we are talking to an individual. It is a move to a much more organic, less ‘machine way’ of doing things. This is why post-PC technology can be used by a 3-year-old who doesn’t know who to read and write, and by a 75-year-old who is not computer literate. It resonates with something essential to our human way of doing things.

At the beginning of the eighties, when Bill Gates and Steve Jobs were setting into motion events that would give rise to the PC age, Steve Jobs remarked that he viewed computers as “bicycles for the mind” – that a man on a bike, can travel faster and further than a man on foot. In the thirty years that was to follow, the entire underpinning of the technology revolution and the information age that it unleashed, has been built by just a few hundred million of us having access to these “bicycles for the mind”.

As we move from a PC era to a post-PC era, we are transitioning from operating systems to ecosystems
The post-PC world that will be shaped over the next 30 years is going to be incredibly enriched by all 8 BILLION of us expressing ourselves and amplifying ourselves through devices like smartphones and tablets – essentially, most of humanity will become connected in the following generation.

In the PC era, computers and their capabilities at that time were defined primarily by the capabilities of the operating system which powered them; usually Microsoft DOS or Windows, Apple’s System OS and Mac OSX, or various flavors of Unix. In the post-PC world, it is ecosystems that rule the roost, with Apple being the strongest, followed by Microsoft and then Google and other players. The capabilities available to a user depend on the strength of the ecosystem.

This is not to suggest that an ecosystem means closed choices. In fact, I would argue that an ecosystem is an organized response and set of APIs for common processes, so that users can focus on human meaningful tasks – that increased interoperatibility is a key function of an ecosystem service. For example, think of the time it used to take to back up a device. Apple’s iCloud service now makes that pretty hassle-free. Most people’s experience is now enhanced without them having to learn complex processes or behaviors.

By offering a coherent set of services to various sectors like education or enterprise, they make the adoption and future management of Apple technologies much simpler for those customers than the competition.

Apps themselves, are mere magnets drawing us in to the ecosystem, our experience amplified by the ecosystem in countless ways so that we can focus on other things, on the task at hand. In many ways, the ecosystem can be said to be “the wind beneath the wings” of the app experience.

So it turns out that this post-PC space (and by extension the process of app development) is not about ONE thing, but about ALL things – how each element needs to act in concert to achieve impact. So when Apple releases a new device or service or OS, it’s not about that one thing, but about how it fits into the whole.

Some recent updates
When looking at Apple, you cannot look at one element in isolation; each and every tweak in the ecosystem relates to each other. Upon reflection of some of their recent moves, it seems Apple has been moving aggressively to invest in their ecosystem value proposition.

Eliminating lag is a very important element of post-PC ecosystems.

Because of their “fractal-ness”, post-PC organizations like Apple are able to scale behaviour in ways that traditional thinkers find startling. iOS 7 has been adopted faster than any OS in Apple’s history, even though the installed base is far greater. Even though it’s larger, they’re moving faster and their users are able to keep up.

Compare that to Android for example, which is stuck in the operating system-to-ecosystem transition at the moment, and we see the broad range of OS fragmentation that is occurring. The user base tends to have diverse expectations based on their flavour of OS + device, making the ability of the ecosystem as a whole to move forward very difficult indeed. For everyone is on a different page, so to speak.

So Touch ID is not about security so much as it is creating a friction-free transactional economy. It’s no accident that Apple is using Touch ID to validate its own store purchases. The data it gathers from that will be invaluable to improving the service but if, as a happy accident, it means you can unlock your phone by picking it up, then great! But make no mistake, it’s aimed at being a fast way establish transactional trust.

Where Apple was expected to cut prices, they used extra margin from new iPhones to add ecosystem value. Apple is not thinking of a device price point – they’re focusing on creating a lubricated transaction environment. Giving away free iApps enhances the overall ecosystem value not just the device value.

To update Steve Jobs for the post-PC world: “a man in an ecosystem can travel faster and further than a man on an operating system.”