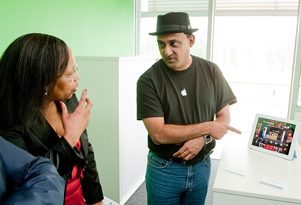 immedia is committed to skills development within South Africa’s mobile market. As such, we are a proud member of the mLab programme and were invited to the recent launch of the first mLab in Southern Africa which aims to boost the growth of mobile applications throughout southern Africa by providing services and support to mobile developers, innovators and entrepreneurs.

Based at The Innovation Hub in Tshwane with a satellite office in Cape Town, the mLab is described as; “a mobile applications laboratory, which incubates innovation and entrepreneurship in mobile apps and content services in the region”. A key objective is to scale-up mobile entrepreneurship into sustainable businesses that create jobs and boost local economies.

Given that immedia is a specialist in strategy/consulting and app dev in iOS, Android, online and Windows Phone 7 has resulted in an excellent synergy between itself and the new mLab. Immedia CEO Anice Hassim says; “The launch of this exciting new initiative gives further credence to the role that the mobile economy has to play in the development of South and Southern Africa.

“Within that scenario immedia remains committed to local skills development and talent creation in app and mobile dev. The post-PC landscape requires significantly different skill sets and teams than traditional development. It is vital that we create a critical mass of skills in the country and we are therefore committed to supporting mLab in their initiative for incubation, mentorship and entrepreneurship,” explains Hassim.

He adds; “We’re convinced that initiatives such as the mLab means that much like being a doctor, lawyer or teacher are currently seen as chosen professions for graduates, in the future being a developer will be just such a laudable and natural choice!”

During the event, Hassim was able to clearly show the personalisation aspects of immedia’s recently launched Computicket Android app to the Gauteng MEC for Economic Development Ms Qedani Mahlangu, as well as the importance of having a multi-disciplinary team in the creation of an app and the role the design of an app plays in terms of enhanced user-experience.

Looking ahead, it is hoped that mLab Southern Africa will assist in making the region a global hub for mobile innovations that will boost job-led growth and tackle economic and social needs. This strategically located facility will draw upon South Africa’s high bandwidth environment and talented pool of expertise with strong connections to the rest of Africa.

Three more mLabs are set to open by the end of the year in Armenia, Pakistan and Vietnam and be linked for cross-pollination of ideas and innovations.