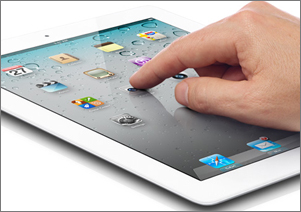 We hinted at its arrival in last month’s newsletter but on Friday 4th March Apple was proud to announce the birth of its next generation iPad 2 and boy did it not disappoint!

The new Apple iPad 2 is a significant advancement on its predecessor, which if you remember only launched in April 2011.

It’s thinner (33% to be exact) having gone from 13.4mm to 8.8mm in thickness which means that the iPad 2 is also thinner than iPhone 4, it’s also lighter down from 680g to 580g and dramatically faster thanks to its A5 dual core processor. This means its graphics are also nine times faster, while using the same power as the processor from the first iPad resulting in the same 10-hour battery life. It also features both a rear camera, and a front-facing camera that allow for FaceTime video conferencing as well as HD Video.

Speaking at the launch event Apple founder and CEO Steve Jobs said, “It’s in Apple’s DNA that technology alone is not enough. Its technology married with liberal arts, humanities that yields us the result that makes our heart sing. And nowhere is that more true than in these post-PC devices.” He also pointed out the fact that Apple’s competitors are going after things like specs like they did with the PC, but they’re missing the point.

One of the cleverest accessories launched in tandem with the iPad 2 is a smart cover that takes the form of a bendable flap that sticks on to the side of the device and uses magnets to grasp on to the device.

DID YOU KNOW? Apple sold 15-million iPads in 2010 (from April-December), accounting for $9.5 billion in revenue. “More than every Tablet PC ever sold,” Jobs says. 65 000 apps that work with the iPad natively which means they’re not blown up iPhone apps.