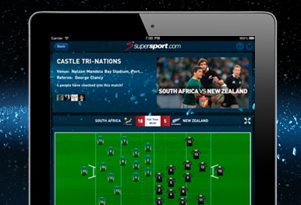 We’re living in a different time when it comes to the digital landscape, and although it’s exciting because it’s now all about the user, it’s also daunting for companies trying to establish a foothold in the quicksand of the modern marketplace.

In this month’s issue, immedia CEO Anice Hassim tells us how all too often he comes into contact with clients who’ve been burned by agencies intent on talking, but not walking the ‘digital path’. Are you surrounded by talkers or doers when it comes to getting into the digital space? Choose your digital partner wisely – it’s one thing to be able to drive someone else’s platform but it’s an entirely new challenge to be able to create something out of nothing.

immedia’s focus on the doing has resulted in the launch of two client apps this month: the upgraded SuperSport iPad app just in time for the Rugby World Cup, and the latest Android app for Computicket.

As the Springboks go head-to-head with the best in the world at the 2011 Rugby World Cup, immedia and SuperSport have launched an exciting new version of the SuperSport iPad application – just in time for the kick off.

SuperSport wanted to take the rugby experience to the next level with an enhanced multimedia experience for its viewers. The defining feature of the new app is that it digs even deeper into the rich content that SuperSport has become synonymous with, and in so doing, perfectly displays the ability of mobile technology to infuse viewer interactions with a richer, more meaningful experience.

immedia Head of Development Kishyr Ramdial says the new version of the SuperSport iPad app is a perfect example of the mobile intellectual property that can be created within the African context. He explains that what sets the latest SuperSport iPad app apart from others on the market is “its real time data uploads, making it a true match companion and what’s more, the updates are pushed to the application live, so there is no need to refresh the screen”… read more

The new app allows for a far more intuitive human experience by the user and its ‘personality’ can best be described as ‘intuitive’. Lead Android Developer at immedia, Nishern Govender says: “We were briefed by Computicket to create an app that was clean, uncluttered and a pleasure to look at. The design therefore treats images and colours in a way that focuses on ease of use and accessibility, rather than simply function,” enthuses Govender… read more

Is your digital agency about thought creation or regurgitation?

Are you surrounded by talkers or doers when it comes to getting into the digital space? You know the type who just sits there pontificating about this that or the other but when push comes to shove, doesn’t deliver the goods. We know them – hell, we’ve even had to work with them from time to time – but immedia CEO Anice Hassim says it’s time to embrace a breath of fresh new digital air…

Without a doubt, the post-PC revolution has brought tremendous challenges to organisations wishing to take advantage of the massive migration of users to these platforms. With the new intimacy of technology (post-PC devices in particular resonate with humans at a far more intimate level than PCs), architecting, managing and deploying solutions within organisation requires a rebooting of hardware assumptions, software integration and people support.

Unfortunately, often when we sit across from potential clients and espouse the brave new world of post-PC devices and what it takes to be a real player in the market, many of them look at us like the proverbial spy who came in from the cold. My question is “why?” In my experience it’s largely because their partners to date, haven’t been servicing them as they should… read more

immedia is committed to skills development within South Africa’s mobile market. As such, we are a proud member of the mLab programme and were invited to the recent launch of the first mLab in Southern Africa which aims to boost the growth of mobile applications throughout southern Africa by providing services and support to mobile developers, innovators and entrepreneurs.

Based at The Innovation Hub in Tshwane with a satellite office in Cape Town, the mLab is described as “a mobile applications laboratory, which incubates innovation and entrepreneurship in mobile apps and content services in the region”. A key objective is to scale up mobile entrepreneurship into sustainable businesses that create jobs and boost local economies.

immedia’s specialisation in strategy/consulting and app dev in iOS, Android, online and Windows Phone 7 has resulted in an excellent synergy between itself and the new mLab. immedia CEO Anice Hassim says: “The launch of this exciting new initiative gives further credence to the role that the mobile economy has to play in the development of South and Southern Africa… read more

In the future, being an app developer in the post-PC marketplace will be just as coveted a career choice as being a doctor, lawyer or teacher are today.

In light of this, immedia has embarked on an exciting training initiative, aimed at providing South African businesses and individuals with the skills they need to become global app creators.

A major coup is that many of the technical courses will be instructed by Swiss-based mobile developer, respected consultant and experienced trainer, Adrian Kosmaczewski from Akosma Software. Adrian has been writing and teaching software for the past 20 years. Since 1996 Adrian has shipped web applications using various technologies, as well as desktop systems for Mac OS X, Windows and Linux, and lately mobile apps for iOS and Android. Delegates will also have full access to the local expertise of seasoned digital gurus immedia CEO and Head Strategist Anice Hassim and Head Developer Kishyr Ramdial.

The courses are designed to meet the needs of a range of delegates and skills levels namely; app developers, dev beginners and executives:

• APP DEV – Four courses pitched at developers with interests in any of a number of technologies, and with various level of skills: iOS Beginners, iOS Advanced, Cross-Platform App Dev and Cloud Services in App Dev.
• THE BUSINESS OF APP DEV – This is aimed at executives wanting to come to terms with the ever-changing mobile space. This custom course is therefore directed specifically at marketing managers and other business executives and will provide a consolidated view of the landscape so that they can make the right digital marketing decisions.
• CAREER DAY – School leavers contemplating their careers will be exposed to the joys of iPhone and iPad development via an iOS101 workshop.