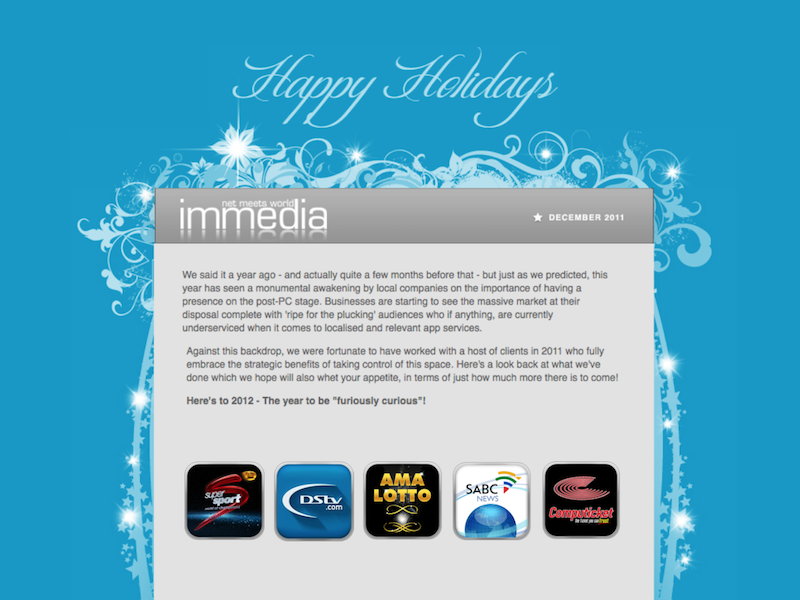 We said it a year ago – and actually quite a few months before that – but just as we predicted, this year has seen a monumental awakening by local companies on the importance of having a presence on the post-PC stage. Businesses are starting to see the massive market at their disposal complete with ‘ripe for the plucking’ audiences who if anything, are currently underserviced when it comes to localised and relevant app services.

Against this backdrop, we were fortunate to have worked with a host of clients in 2011 who fully embrace the strategic benefits of taking control of this space. Here’s a look back at what we’ve done which we hope will also whet your appetite, in terms of just how much more there is to come!

Moneyweb Talk app for iPhone and Android (November 2011) – These apps can be described as a PVR equivalent that let users aggregate the financial guru’s broadcast channels seamlessly into a single spot, with key breaking news and market data. One of their key strengths is their real-time delivery as well as their ability to harness a range of social media and next generation journalism into a user’s device of choice.
DStv for iPad

DStv TV Guide iPad app (October 2011) & DStv TV Guide iPhone app (November 2011) – These have taken DStv’s TV Guide experience to a new level, thanks to their ability to filter content via genre, favourite channels or DStv bouquet. The apps also provide viewers with reminders of their favourite programmes and are a source of rich entertainment-orientated news content.

SuperSport iPad app (September 2011) – SuperSport.com wanted to take the rugby experience to the next level with an enhanced multimedia experience for its viewers. One of the best aspects of the new app is that it digs even deeper into the rich content that SuperSport.com has become synonymous with and in so doing, perfectly displays the ability of mobile technology to infuse viewer interactions with a richer, more meaningful experience.

Computicket Android app (August 2011) – From the onset of the app design, immedia was guided by Computicket to develop an app that’s clean, uncluttered and a pleasure to look at. The design makes use colours and images that are easy on the eye, with screens that are not complicated.

Computicket iPad app (June 2011) – Lets users book and discover events quickly and easily. Not only can they search featured events, but they can also browse by category, venue and location.

AmaLotto iPhone app (June 2011) – Developed by an all-girl dev team with less than six months experience, this app began as a small pet project which gained recognition from the rest of the team at immedia and subsequently evolved into a real-life project. The Lotto app serves as a quick and easy way to receive the latest results and users can also utilize the app as a Quick Pick number generator by shaking the device.

SABC News iPhone app (December 2010) – A key strength of this app is the quality of the content created by the 24-hour newshounds in the SABC newsrooms resulting in seriously smart, short sharp coverage of local and international breaking news, as well as the sports, business, entertainment and political sectors.

Computicket iPhone app (November 2010) – The first of a range of post-PC releases from this highly forward thinking client, saw the launch of an iPhone app which among other things provides notification for favoured events and the added convenience of being able to book anywhere, anytime.