Steve Jobs: a “ding in the universe” 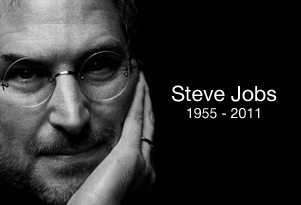 Posted by Anice Hassim on November 9, 2011 | Featured | No Comments

A few months ago, I had the privilege of watching a “Steve-note” live, as Steve Jobs introduced iOS 5.0, Lion and iCloud at Apple’s WorldWide Developer Conference in San Francisco. As he entered, the room erupted in an outpouring of love as 5 000 developers and Apple staff paid homage to an icon of our age. It was an electric moment that seemed to choke him up as he surely knew this would be the last.

His passing yesterday, Wednesday, 5 October 2011, as much as it might have been anticipated, came as a shock around the world. The Apple homepage was devastatingly simple. We all know the impact Jobs made on our world.

Everything has changed
Apple may never be the same, but thanks to Jobs, neither is the future we live in.

Steve Jobs, they say, IS the American Dream. And, in truth-is-stranger-than-fiction style, no Hollywood script could describe the incredible personal and professional journey his life would take.

I won’t say anything about Jobs complete reinvention of the fabric of modern society – that much is all around us. Let’s look deeper, I believe, to his real legacy.

And boy do we in Africa and the developing world need to transcend our circumstances.

And because a musician in Ghana, a writer in Mombasa, or a young app dev team in Durban can sell their creations to the world, he has given us the oxygen to make this transcendence a reality, if we so wish.

Jobs famously said he never wanted to die the richest man in the cemetery, but that he wanted to “put a ding in the universe”.

Well, there IS a ding in the universe today.

Mission accomplished, Steve. Thank you for an iLife.