The app vs. mobi debate – it’s not up for discussion. 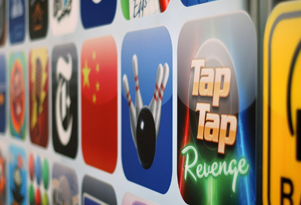 The debate’s over. We’re living in the time between times, between what was and what will be. You know, like when you went “Mom, get a mobile!” In a similar way an app is coming to entice your target market away, no matter what industry or discipline you are in, so best you get to understand the medium…

Why the sense of urgency? Well consider that the rise of the digital revolution had an approximate lifecycle of 12 years and that the Smartphone revolution, i.e. from web to mobile, is happening at a quarter of the pace – approximately three years. What’s even more frightening or exciting – depending on which way you look at it – is that the adoption rate of iPad is happening almost in tandem but at an even faster rate.

Even more astonishing is that despite one million more Windows PCs being sold year on year, in the second quarter of this year (2011), a whopping 5.5 million more iPads were sold. There’s also the fact that including eBooks, the App Store currently delivers at least 44-million new content downloads per month (excl. Movies, Rentals, TV shows, updates) while overall app downloads are running above 31 million per day (Source: Asymco)

Writing on Twitter recently, revered post-PC analyst Horace Dediu pointed to the fact that we’re no longer even in the PC era, which was characterized by very high software development costs and very difficult software distribution channels (retail box sales typically)
“The post-PC era is characterized by an explosion of ideas and application of new talent to software. It’s an era of immediate gratification and painless, one click distribution. App production is a cottage industry not something entrusted to only a few experts or those who can raise venture capital. It allows the small to distribute widely and get a shot at stardom. It has been (thankfully) avoided by enterprise buyers. The result is an explosion of apps: well over half a million new apps have been built in three years on three platforms that did not exist three years ago,” he wrote.

The African century
It’s because of these characteristics that the post-PC revolution presents a unique opportunity for Africa, especially when one considers the fact that in Africa more people have access to cellphones than drinking water. We’re not a continent already bogged down in technology but rather present a fluid, robust and energetic market that is quick to take up new technology and has an inherent thirst for content.

This places us at a distinct advantage over more developed economies and, more importantly, means we no longer need to be the recipients of exported culture, expression and interaction models. This rare opportunity means it is not enough that we as Africans merely participate – we must lead!

One of the biggest prohibitors to this occurring, however, is a lack of understanding that if you are in fact committed to embracing the new age of digital, it’s important to realise that what we face is a cultural not technical challenge.

What I mean by a cultural challenge is (?) a sharp change in mindset. This involves understanding that apps are not about the device – they are a new medium, a framework for all of human expression because they forge such a strong connection between human and machine.

This is because at the heart of every app is the user not the hardware about the user – these days a click (web) is not a tap (post-PC). Really good developers therefore understand that app dev is not about coding. It bows to the consumer and has to be a collective effort to create a personality and culture through craft.

How do you solve a problem like mobi?
However, because of the lingering legacy of old technology such as mobi sites, we often face the challenge that potential clients appreciate the differences between a mobi site and an app, and even admit that an app is a much better solution for their brand/service. They may, however, already have invested in mobi technology and not yet recouped a return on that investment, in the form of sales or similar revenue streams and are therefore not willing to commit to investing additional budget into post-PC technology “just yet”.

To fully explain the necessity of making at least a foray into native app territory now not later, I often use the ‘porch light and umbilical cord’ analogy. This refers to the fact that a mobi site attracts customers much like moths to a porch light i.e. in a random, haphazard fashion with no long-lasting connection between the two and no way of controlling which moths reach the light. In comparison, an app is like an umbilical cord, intimately attached to individual customers in a much more personalised, targeted manner. It utilises smartphone and tablet hardware that is far more portable than a laptop and is intuitive of the user’s needs and wants.

What’s also important to understand when considering investing in post-PC technology is that every time you go cross-platform and not native explanation of term for reader? you leave a gap for a disruptor to innovate into your space. Tech-savvy 21st century consumers are also not easily fooled and will quickly see that you’ve merely stuck a band aid over your existing offering with a couple of nifty new gadgets and in their book, that’s simply not an app. So while this approach may be cheaper in the short term, it comes with its own set of long-term ‘costs’, such as reduced functionality.

The botttomline is to acknowledge that things are moving swiftly and jump on the post-PC express before it’s too late. Don’t see it as a grudge purchase. It’s a vibrant dynamic environment for brand communication. Embrace the fact that as a marketer you’re lucky enough to operate in the post-PC world and have the opportunity to connect your brand with your customers in a way that wasn’t possible three, or even two years ago. Re-think your spend and don’t be afraid of the technology or underestimate its impact. It’s not just a fad or a gimmick. It’s here to stay.