Thoughts on the App Store 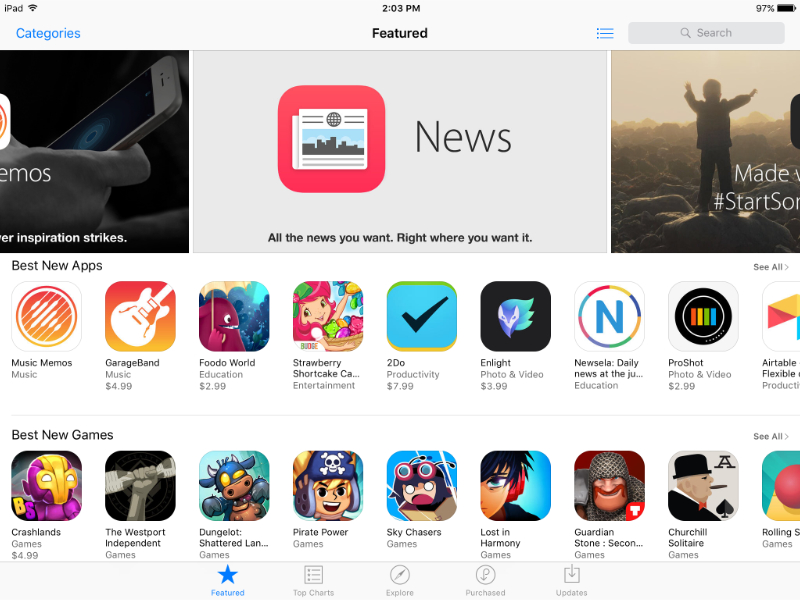 Until December’s reshuffle, users (both consumers and developers) bore the brunt of the rather peculiar situation of responsibility for the App Store falling between two disparate teams at Apple.

The developer relations team and editorial team responsible for selecting featured apps reported to Phil Schiller in Product Worldwide Marketing. Everything else including iTunes Connect, app review, the store itself fell under Eddy Cue’s Internet Software and Services organisation. Sure, there have been many high-profile cases of apps being featured by one team but then pulled by the other (for violating some interpretation of a policy) which highlighted some of this internal chaos. But, crucially, the App Store has always felt (been?) tacked on to iTunes, a store built to deliver digital music.

Cue’s team seems to have done what it could to improve the user experience, but getting a user to download (or buy!) an app is not the same as selling Taylor Swift’s Rihanna’s new single. Don’t get me wrong, the App Store has been an unprecedented success for Apple. The underlying technology is fine. It’s doing the job.

But we’re at (past?) the point where not only does the App Store need to be thought of and led cohesively, but also within the broader context of what makes Apple’s devices and the experience of using them so compelling.

The App Store (and its growth and evolution and iteration) is not a technical problem. It’s not a services problem. Apple did not need to consolidate accountability for the App Store under Phil Schiller so we (users and developers) get upgrade pricing, or a mechanism to trial apps. That’s an exceedingly narrow way of looking at this.

As ever, if useful to look at this through the lens of Professor Clayton Christensen’s jobs-to-be-done framework. What ‘job’ are we ‘hiring’ the App Store to do?

What ‘problem’ does the App Store need to solve?

The App Store problem is a content one. It’s a context one. It’s an editorial one. A user one. A proposition one. A product one. An ecosystem one.

The App Store is (increasingly) a fundamental part of the value proposition which Apple presents to users every single day when they use a product (not just when a new iPhone launches).

The iPhone is a better device because of the App Store (and the design and the camera and the hardware and iMessage and Siri and the emotions it invokes when you use it, amongst many, many things). These are additive. Product marketing. It’s there – well it was – in Schiller’s title.

Usefully, Apple has scale in its favour. The App Store keeps growing because the iPhone is such an enormous business (and remains growing, albeit at a slowing rate). It is this scale that masks a number of uncomfortable truths.

The Watch App Store is broken. Not in the technical sense; in the product sense. It’s not even part of the product, it’s buried in the Watch app on the iPhone (I’m not saying that it should be on the Watch, just that its obviously divorced from it).

The App Store on the new Apple TV is a relative wasteland (plus, it literally only exists on the TV… there’s no way to share anything, no way for brands and developers to publicise anything aside from asking you to ‘search’).

The iPad Pro is doing a little better, but there are signs too that things aren’t quite where they should be, especially for such a premium product with a distinctly different appeal and use case to virtually any other tablet.

Discovery is broken. Serendipity is broken. Sharing is broken. Sustainability (for developers) is broken. Users need to be encouraged to download more apps, to try more apps, to use more apps, and (importantly) keep more apps. Again, many of these aren’t technical problems even though they may appear to be. These go to the core of the vibrancy and health of the ecosystem.

Apple’s not exactly going to admit any of these issues publicly (that’s not the way it does things!) but ‘hubris’ is one thing you can’t accuse Cupertino of.

There is huge expectation that Schiller is going to (somehow magically) ‘fix’ the App Store ‘this year’. But this is a process, not an event. The fact that there’s now a single executive and team accountable for it is a far bigger deal than you’d think. And it’s very encouraging that Apple has realised where the App Store ‘fits’.