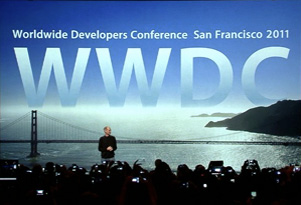 The event is the Apple Worldwide Developer Conference. The pilgrims have come to hear Steve Jobs, Apple’s founder and CEO, deliver his keynote address at 10 am. And they are prepared to stand in line for 14 hours to ensure that they get to be seated in the main auditorium which has limited capacity. Latecomers will be accommodated in adjacent auditoria to observe the proceedings via televised projection.

I have a ticket for the event but will probably be among the latecomers. I met Steve Jobs twenty years ago at Princeton University, and so seeing him in the flesh is less important to me than hearing what he has to say.

“You run a radio company! Why are you at a computer conference?” Three people have separately asked this of me since my arrival here.

It’s a difficult question to answer.

Do you remember Remington, Olivetti, and Smith Corona, which were once extremely profitable companies making lots of money manufacturing and selling typewriters?
Or the Sony Walkman, which once owned the market in personal music players?
Or Nokia, which once was the world’s most profitable manufacturer of mobile phones?
Or the big music stores which once controlled the sale and distribution of audio recordings?
Or Amazon, which once held the monopoly on sale and distribution of electronic publications?

I mention these because all of these were well-run companies with sound business forecasts who suddenly found their world turned upside down because they suddenly faced competition from a company that had no business being in their territory. Apple was supposed to be a computer company – why would they make a music player?

It’s because Apple more than any other company in history have had the ability to take a cold hard look at the way things are being done, and throw away even successful products in favour of better ideas. And those ideas have a spillover effect that wipes out some businesses while creating new opportunities for others.

Radio is old technology. The business model we rely on today is the same as that of Springbok Radio from 55 years ago – create programming that draws in listeners and sell advertising to make money.

But my competitors in the years to come will not be controlled by Icasa or regulated by the Broadcasting Complaints Commission – they will be based around the world in New York, London, Lagos, Mumbai, and Tokyo. Apple’s iPhone and iPod and iPad already allow my listeners to access those radio stations. As bandwidth continues to become readily available, the number of people who listen to those competitors will increase.

At the same time, those self-same technologies are allowing me to compete with those overseas stations in their own markets. I can take the fight to them. And I won’t be limited to radio. I will be able to do music video, music sales, regional advertising, and a whole lot more.

When a tsunami approaches, we can either be engulfed by the wave or ride the crest to safety. But first, we need to be aware that a tsunami is coming.

Taken from The Post. Column reprinted by permission from Kanthan Pillay who accompanied the immedia team to WWDC.