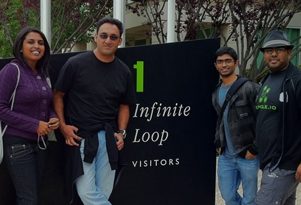 Published on June 28, 2011
The immedia team recently spent a fascinating week at the Apple World Wide Developers Conference (WWDC) soaking up invaluable international insights and exchanging ideas with developers from across the globe….

Outlining some of the top line insights garnered at the event, immedia CEO Anice Hassim says essentially this was a massive Eco-system reboot that puts Apple head and shoulders above the competition.

African media people would be mistaken to believe that apple is not going to be major player… They cut the cord to the PC so the post-PC rev is well and truly here now. For example, you can buy a pad for R3 500 and be even more productive than with a PC at twice the price for the vast majority of users.

Apple’s new ecosystem foundations are set to revolutionise the rich world, (iCloud), the developing world (post telco) and the aged… aided by the eEase of use of technologies like Twitter, FaceTime, discovery etc.

“This has major, major implications that will take months to unpack but those are the biggies for us in Africa,” reports Hassim.